The newcomer had a neat beard and auburn hair clipped close to his head. His green tunic was notched at the bottom, and a sword hung at his side. Ganix perked up when he noticed the golden stars decorating the man’s cloak pin. “You’re a ranger!”

“True!” he replied with a bow. “Warner Robins, at your service.”

Rangers were sort of like knights. They upheld the laws of Liberty and helped people in need. The freckle-faced boy thrust out his hand and said, “Hi! I’m Ganix!”

—excerpted from Byways #4, Up the Mountain: A Ganix Johns Adventure

Rangers. Liberty’s law enforcement is given over to an order of brave and honorable folk known as rangers. While some are given permanent posts in cities and towns, many more are travelers. Liberty is a big place. They rove through their districts, lending aid to travelers and checking on remote outposts and colonies. Some serve as guides. Others investigate crimes or track down criminals. Those with magical talent are often sent into the Wilds, which are filled with strange and wonderful (and sometimes dangerous) creatures. 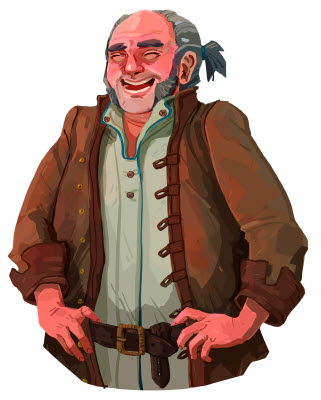 Readers learn early on in the series (Book #1: On Your Marks: The Adventure Begins) that Vanek Johns served as a ranger. In his younger years, he traveled throughout all of Liberty. Uncle Vanek’s many connections were a big help to Ian Johns when the time came to set up Liberty’s postal service.

How to recognize rangers:

Here are two of Hannah Christenson’s sketches for the interior illustrations in Byways #4, Up the Mountain, in which Ganix meets a ranger who’s passing through.

There’s much to come in the Byways books, which are adventures for young readers. Which brother will you be cheering on?