What’s this series about?
A race. Three half-brothers turn their father’s plans for a tour of the country into a three-way race across it. Ewan, Zane, and Ganix take sibling rivalry to new lengths in a journey that will put them in unfamiliar territory.

Can you quickly introduce us to the Johns family?
Ian Johns is the postmaster of Liberty, and he has three sons. 1) Ewan is a reliable guy—hardworking, protective, and shy. 2) Zane grew up wild. He’s a lone wolf who wants nothing more than to be free. And 3) Ganix just wants to have fun. He’s always landing in some new mischief.
…..Members of the Johns family have magic in their bloodline. More specifically, they’re Changers, able to take on an animal form. Ian can become a golden eagle. Ewan’s form is an elk. Zane can shift into a wolf, and Ganix transforms into a raccoon.

We understand there is an educational twist to the series. How do the books connect to the fifty states?
On the surface, the Byways Books simply tell their tale, but CJ is playing a game. State facts are woven through each story—people, places, landmarks, icons, and cities. At the end, CJ lists these details for readers so they can join the game of hide-and-seek. The series will take on all fifty states in order of ratification. So Book #1, On Your Marks: The Adventure Begins, covers Delaware, The First State.

Does that mean the setting is early America?
Not at all. The story takes place in a land called Liberty. Ewan, Zane, and Ganix will take three different routes across the countryside. North through the mountains and forests. South through rolling hills and balmy coves. And a central route through an area known as the Wilds, where mythical creatures and magic hold sway. In the Byways books, readers will traverse an ever-changing fantasy landscape, encountering dragons, griffins, river monsters, and rogue magicians. 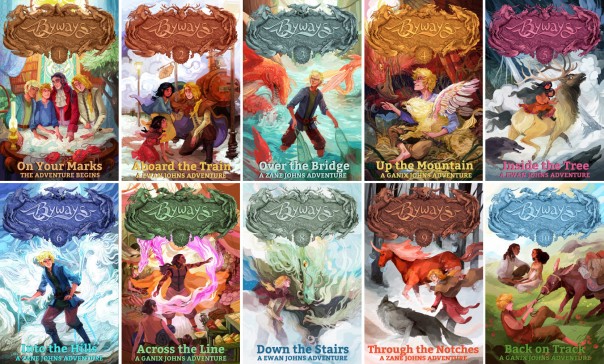