When Tupper Meadowsweet is first hired by the gray mountain’s Keeper, the lad has little concept of the world beyond his village. He’s never heard of oceans, let alone other continents, so he’s just as frightened as the rest of the Flox in Hayward when Freydolf strides into town. If the rumors are to be believed, the mountain’s Keeper is a monster. And with his wild hair, claws, and fangs, the Pred certainly looks the part.

A sheep in wolf’s clothing. The two most prominent species in Meadowsweet are the Flox and the Pred. During early planning for Galleries of Stone, I decided to make Freydolf an outsider, a proverbial wolf among the sheep. His name means “peaceful wolf.”

Flox have sheepish characteristics—curling hair, nimble feet, and a set of horns for males. They tend to be smaller in stature than most races, with a slender build. The top of a tall Flox male’s head would reach the shoulder of your average Pred. (When Freydolf first hires Tupper, the boy is only hip-high. Definitely puny by Pred standards.) Flox are self-sufficient and very much tied to their land. They’re peaceful folk with simple pleasures, given to large families and close-knit communities. Most Flox have never traveled any farther than their neighboring villages, and little thought is given to the wider world.

• Barter is as common as curls among Flox, who are savvy hagglers.
• Flox are universally fair, with hair color ranging through blondish hues from warm gold to true silver. Eye color mostly varies between blue and green.
• Males keep their hair cut short, possibly to display their horns to best advantage.
• Flox are tactile people, demonstrative in their affections (i.e. touchy-feely).
• Two major festivals anchor the Flox calendar—mid-summer and mid-winter.
• Schooling happens at home, so the extent of one’s education depends on how many books a family owns.
• Cottage industries are typical, and children begin by learning their own family’s trade/craft.
• Boys who’ve nubbed are considered old enough to hire out. Girls of ten do the same.
• Villagers in Morven’s foothills are able to hire on as workers in the quarry on the south-western slopes. Harvesting stone is the surest way for a man to earn coin.
• Flox marry around the age of eighteen, when a male’s horns take an upward turn.

Carden Meadowsweet. At the age of 20, already a husband and father. 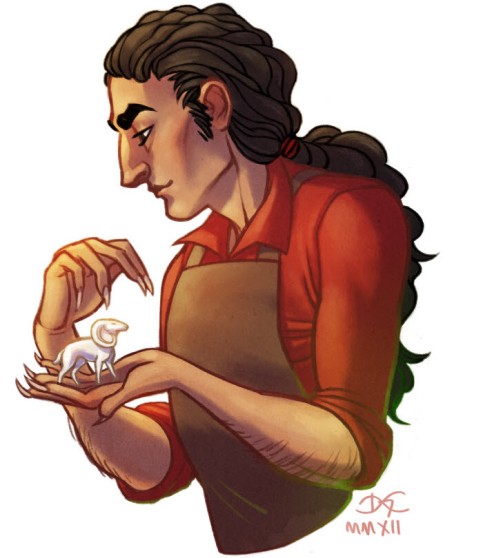 Master Freydolf with one of his smaller carvings.

Pred are conquerors, famous for their ambition and feared for their cruelty. They’re tall and powerfully built, deft with the handling of weapons and light on their feet. Their bloodiest years of conquest are mostly in the past, but the old houses still uphold tradition. They’re a sea-faring race, known on all four continents, and merchant trade accounts for much of their wealth. Pred rites of passage are bloody and brutal, and they’re a proud, often elitist people.

• Pred have elongated canine teeth (fangs) and claws on their hands and feet
• In marked contrast to the fair Flox, Pred have deeply bronzed skin.
• Hair color ranges through dark colors—browns and black. Most Pred have eyes in some shade of brown, though some families boast an appealingly wolfish yellow or gold.
• Pred don’t celebrate birth-dates. Age is marked by the quarterly festival (at each solstice and equinox) that falls closest to the time of their birth.
• White guardian statues are traditional baby gifts, especially among Pred who live close to the Alabaster mountain.
• Pred begin training to track, hunt, and handle weapons almost as soon as they’re weaned. Young Pred can vie for piercing when they turn thirteen.
• Group bathing is customary in Pred households—men and boys in one room, women and girls in another.

Do you have any questions about either the Flox or the Pred? You’re welcome to leave yours in a comment.