Summer leaves brushed bronze skin as Aurelius’s scuffed boots left the ground. Lean arms flexed. Claws bit bark. Curling in on himself, the boy swung onto an overhanging bough with all the effortless grace of his kind. After an entire winter’s voyage spent clambering through the rigging on his uncle’s ship, a tree was nothing.

He made it to the fourth limb without disturbing so much as a sparkfly. Gratifying, but not as satisfying as an audience. Not that his regular hunting partners were given to gushing. Quite the opposite. No matter how dazzling his performance, Aurelius’s only reward was a grudging lack of criticism. Impatient uncles. Bitter cousins. Backstabbing brothers. But their silence was easily as fine as the jeweled droplets he’d wear as soon as this rite was passed and he was pierced.

Aurelius had turned thirteen at the midwinter festival, half a lifetime ago. Father had refused to put off a voyage to the Far Continent for the sake of his youngest son’s pride. How his dignity had suffered in the interim! Making him wait until the summer hunt was pure meanness. But Aurelius would show them all. None of his brothers had ever done better than a brace of rabbits during their hunts. Respectable, but entirely too typical. I can do better, so I will.

In order to fetch better prey, Aurelius was bending the rules by hunting out of bounds. Like Aunt Lissie says, the best acquisitions are rarely found on beaten paths. This part of open territory was nearer the White Mountain than most Pred ventured. Aurelius hadn’t been able to find out why. He checked the angle of the sun and settled back, flicking bark from under his claws. Haste now could turn a calculated risk into utter humiliation. Evening shadows were best for hunting. He would wait for them.

A scant hour had passed when a resounding crack ripped through his patient lazing. Aurelius started badly as birds exploded into the air, fleeing the commotion. Five deer bounded away, passing right under his tree. His quarry. Gone.

Heavy disappointment turned to swift calculation. He’d need to run and reset in a different part of the forest. Doable, but deucedly inconvenient. Muttering every oath he’d ever learned down by the docks, Aurelius slipped from branch to branch. Stealth was pointless now, but his hasty descent made no more noise than his earlier climb.

The prolonged clatter of shifting stones dribbled away, but Aurelius’s ears caught the hushed sifting of sandy soil. His mind leapt through possibilities and settled on three. If it was a sinkhole, the ground itself was set against him. If it was one of Vanora’s rock-scrabbling apprentices tunneling beneath his hunting grounds, Aurelius would cheerfully flay the fool. But it if was an old pit trap, there might be a prize.

A leap was as good as a lure in closing the distance between hunter and hunted. He dared hope for a sixth deer. Soft soles made no noise as he picked his way to the edge of destruction. Dirt and dust hung thick in the air, but he caught no tang of blood. Still, he drew his dagger. Wary. Wise.

He wasn’t the only hunter out of bounds.

A girl lay at the bottom of the pit. Since she was unpierced, it was fair to assume she was vying for the same rite as he. She’s still breathing, but she’s as good as dead. Especially if this isn’t her first attempt. Aurelius was sensitive about his age, being thirteen and a half and still unpierced. This girl looked like she was a summer or two beyond him. Mortifying.

Aurelius might have turned away, but one thought held him back. She shared my ambition.

Only someone sure of their abilities would have come this far. The blood of hares was equal to the blood of bears for those with less to prove. Which meant this huntress wasn’t any more interested in paltry prizes than he was. Failure would cost her dear if she was caught out of bounds and carried home. Which seemed the likeliest outcome. Even from here, Aurelius could tell she was pinned by rubble.

He calculated the risks, pitting them against potential rewards. Weren’t advantages made for pressing? He might turn a handy trade in the hours before sunset, trading pitfall for windfall. Aurelius wasn’t opposed to the role of rescuer. If she asks nicely. Picking up a smooth, white pebble, Aurelius gave it a practiced flick. When it pinged off the girl’s forehead without waking her, he simply reached for another.

Author’s Note: This story is a prequel to C. J. Milbrandt’s Galleries of Stone trilogy and updates each Friday. The first two books in the trilogy—Meadowsweet and Harrow—are currently available. The third and final volume is set to release in February 2015. Useful information about Pred culture can be found here.

Deuce © Copyright 2015, C. J. Milbrandt, all rights reserved. If you want to receive an email whenever this story updates, subscribe to the blog. You can also watch for notifications on Twitter and “like” the series on Facebook. 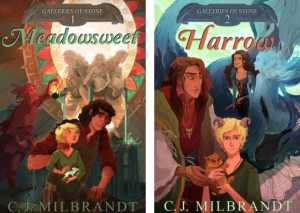